In 2011 friends helped me purchase my first tiny home. Selecting a model recreational park model with upgrades, I moved in with my cats and dogs in March of that year. I called it my cabin-on-wheels. The fragrance of the cedar and wood paneling permeated every room.

A futon served as a couch by day and bed at night. Two armoires, a writing desk with a pull out for my laptop and a small table rounded out my essential furnishings. The dogs and I lived in the front room and my 10 cats occupied the back bedroom.

A year later with help from the same couple, I purchased the 5.5 acres on which the cabin sat. At that time there were two unsightly older mobiles on either side of my tiny home. The newer of the mobiles required repairs to the plumbing, electrical, heating and air conditioning systems before it could be rented anew. Only when the tenant from the older mobile moved did I discover it was in such poor condition, it would be difficult to give away. But eventually, after 14 months, a man showed up one rainy day with his tractor and he pulled it away.

After six years I decided to order a new tiny home with a floor plan better suited to house my now 12 cats and three dogs. In October 2017, when all the systems were installed, we moved in. Not until my tenant of seven years gave notice and moved, did it seem possible to realize my dream of selling the first tiny home with an acre. When my tenant of two years, who resided in the 2011 cabin, said he was trading in country living for the suburbs the process began. The 1995 mobile was sold. With it gone, my first cabin was moved from the center of the lot to the southern border. New septic field lines were created with a survey done this year. Now the cabin-on-wheels awaits its new owner.

Images from my life 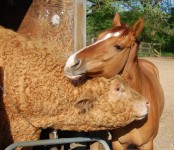 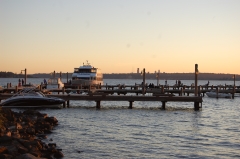 He continued to affectionately groom her 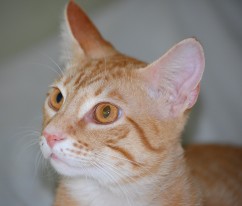 We have been close friends since his birth June 11, 1998 (photo by MJ Branch)
Follow The Brahma and me on WordPress.com
Join 133 other subscribers